MANITOBA, ON / ACCESSWIRE / September 15, 2022 / Snow Lake Resources Ltd., d/b/a Snow Lake Lithium (NASDAQ:LITM) ("Snow Lake" or the "Company") a lithium resource company located in Manitoba, Canada that is committed to operating the world's first fully electric lithium mine, is pleased to update its shareholders on several positive developments associated with its 2022 drilling campaign.

Since the 2022 drilling campaign kicked off in January of this year, Snow Lake has successfully completed over 20,000 meters of additional drilling on the Snow Lake Lithium project, tripling the amount of drilling that can be used towards the Company's resource expansion plans scheduled to be completed this fall. The incremental drilling marks significant advancement of the Company's ongoing drilling campaign and accelerates Snow Lake's path towards commercial production. Snow Lake is progressing on both its environmental and feasibility studies in parallel with the requisite metallurgical testing that is required to deliver resource validation. Snow Lake remains positioned to begin initial site development in 2024 with construction and commissioning of the commercial mine to follow.

As of 2021, the total exploration drill holes completed on the property since 1942 was 75 drill holes (8,842.6 meters). However, drill holes prior to 2017 could not be used for the existing resource because they were not located. Instead, of the 24 drill holes in 2017 and 2018, 4,804.92 meters were used to create the existing SK-1300 compliant resource of 9.1mt @ 1% Li2O indicated and 2Mt @ 0.98% Li2O inferred. Drilling has been focused on the Thompson Brothers Lithium ("TBL") and Grass River Pegmatite ("GRP") areas which comprise 56 of the 78 holes drilled so far. Notably, there were a number of drill holes which had several spodumene intersections. More specifically, there were 2 holes which had 4 intersections and an additional 2 holes which had 5 intersections. These results may prove-up to be 4 to 5 separate dykes of spodumene on the west side of the Grass River. Additionally, within the Grass River Pegmatite ("GRP"), encouraging results related to drill hole GRP-027 were intercepted with Spodumene-bearing pegmatite from 39.36 to 69.02 meters. Spodumene content of the pegmatite dyke is estimated at 20%.

Additional lab assay results are currently in backlog given delays; results from drill intercepts received and reported in news releases to date are expected in the coming weeks.

Philip Gross, CEO and Chairman of Snow Lake, commented, "We are confident this massive drilling campaign will result in a significant expansion to our indicated and inferred resource. Since our initial public offering in November of 2021, it has been Snow Lake Lithium's mission to expand the resource, complete our engineering and environmental studies, and move to production as efficiently as possible to meet the exceptional demand that global electrification has created. As North American automotive manufacturers move towards all electric fleets, we stand as a viable supply of completely renewable lithium from rock to road from within Manitoba Canada. Geopolitical risk has brought attention to the need for lithium security and we believe Snow Lake is uniquely positioned to offer a solution." 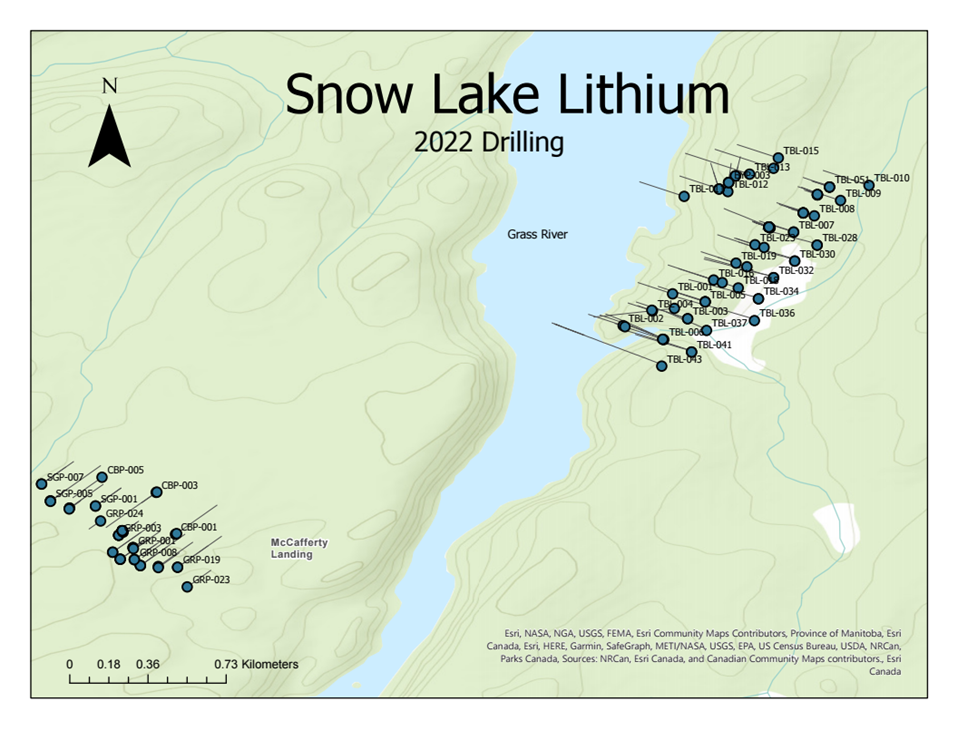 NOTE: DRILL HOLES CBP-007 AND GRP-027 ARE CURRENTLY BEING DRILLED AND ARE NOT INCLUDED IN THE ABOVE SUMMARY. 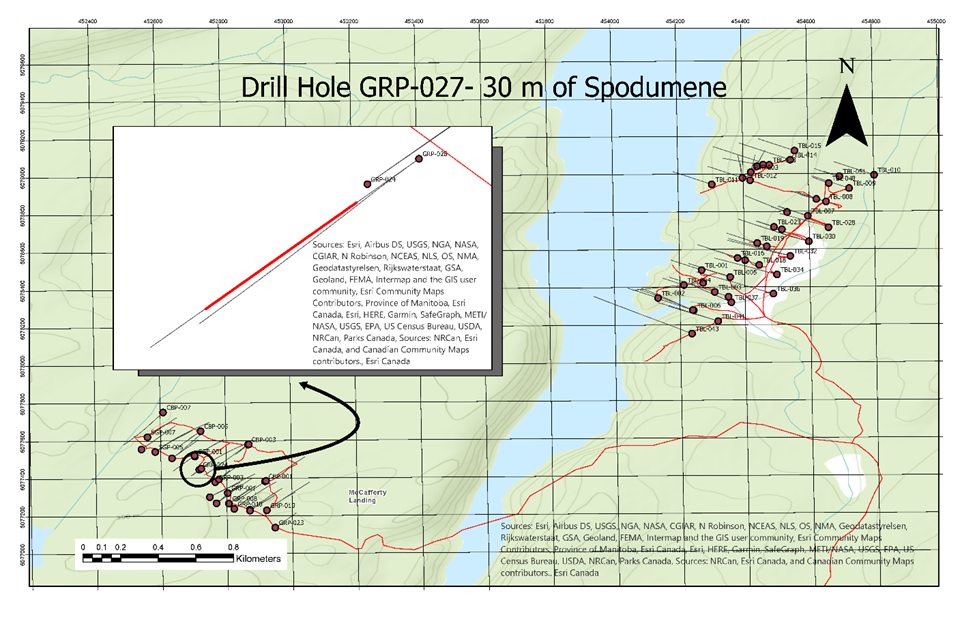 Drill hole GRP-027 intersected Spodumene-bearing pegmatite from 39.36 to 69.02 meters. The Pegmatite dyke is composed of coarse grained potassic Feldspar, Quartz, Muscovite and fine to coarse grained Tourmaline (Schorl). The Spodumene within the Pegmatite dyke was variably distributed with no preferred orientation, and had an average grain size of 2-4 cm. The Spodumene content of the dyke is estimated at 20%.

The Pegmatite dyke cross cuts dominantly intrusive rocks of diorite to monzonite composition, exhibiting a gabbroic texture with variable amounts of mafic (Fe-Mg) minerals. Contacts with the Pegmatite are abrupt and sharp.

Snow Lake Lithium is committed to creating and operating a fully renewable and sustainable lithium mine that can deliver a completely traceable, carbon neutral and zero harm product to the North American electric vehicle and battery markets.

Our wholly owned Snow Lake LithiumTM Project now covers a 55,318-acre site that has only been 1% explored and contains an identified-to-date 11.1 million metric tonnes indicated and inferred resource at 1% Li2O.